This album contains all the songs from ”Now That I Have The Attention What Do I Do With It?” plus some extra tracks.

Though the use of extreme speeds and blast-beats are considered commonplace in underground metal today, the origins of the sound could clearly be traced back to a select few bands falling in the realm of hardcore punk in the early ’80s, with Siege, Deep Wound and early D.R.I. being prominent examples.

Continuing this tradition was Boise, Idaho’s Septic Death, featuring the talents of mainman Brian ”Pushead” Schroeder on vocals/lyrics/artwork. Pushead was an early contributor to such fanzines as ”MRR” and later, created artwork for bands like Metallica.

Septic Death released countless 12″s, 7″s and compilation appearances throughout the ’80s, all independently released and all in high demand by collectors today. 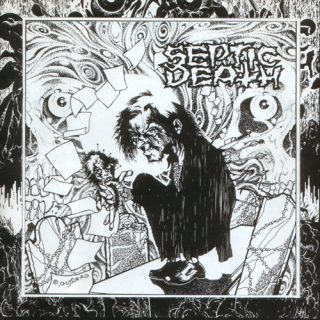 You're viewing: Septic Death
15.00 € Varasto loppuLisää ostoskoriin
Someone in purchased