People in the Sun LP

Second album (and the first to appear on vinyl) from this London group, and the only bad thing I can say about it is that every time I see the cover I get the song “People of the Sun” by Rage Against the Machine stuck in my head.

Fortunately, the vinyl is always at the ready to purge that tune from my head. Erste Theke’s description of ”People in the Sun” calls it a synth-punk record, but I think it’s a lot more than that. Sure, there’s a synthesizer on every track here, but these twelve songs run a wide gamut. “Hey Mr. Dogman!” and “In White” might deserve the synth-punk tag (and fans of Lost Sounds, Ausmuteants, or Nots will love them), but the sunny guitar riff in “True Love” reminds me of DLIMC, “Take My Money!” is like a lost Tubeway Army track, and the title track brings in some Ian Curtis-esque crooning baritone vocals.

While I’m sure fans will have their favorites, the whole record is uniform in quality, which is particularly impressive given its stylistic breadth. With twelve tracks, this also feels more like an album than just a 12” EP, which is refreshing when records seem to get shorter and shorter as the years go by.

Highly recommended if you like gritty underground pop music. 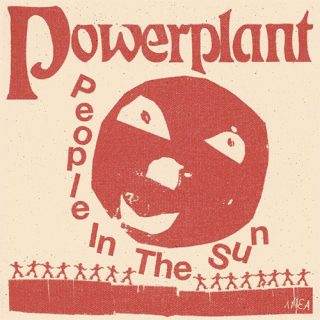 You're viewing: Powerplant
17.00 € 3 varastossaLisää ostoskoriin
Someone in purchased