The likes of Human Abfall, Mosquito Ego and Atatakakatta are leading the charge in Germany’s punk/wave underground, and Pisse aren’t far from the forefront. This new LP is way more focused than their prior effort, which bounced around from new wave playfulness, to no wave moodiness, to bizarre renditions of country-fried Americana. There seemed to be no rhyme or reason for any of it, save for perhaps a band finding their footing. Some good ideas surely seeped through, and they’ve now shaped them into a controlled, tightly-wound attack.

The vocals previously sounded strained, failing to project menace, and this time around they’ve got much more pop. There’s no dip in the action, start to finish. They do, inexplicably, open the album with an electronic track—one featuring a female MC named Miss Red riding over the top of a wobbly ragga backdrop. No complaints! The song is done respectfully, and the thumping basslines are faded out towards the song’s end to be perfectly mimicked by a wiry electric guitar, making for a nice segue.

Then there’s the subsequent 12 songs, featuring tight interplay from a trio who’ve gelled extremely well in just a short period of time. They might be the best synth punk act going. I’d confidently put this release up against any Ausmuteants album, yes. 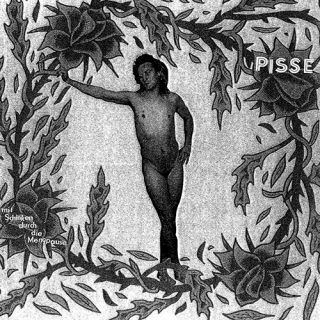 You're viewing: Pisse
16,00 € 1 varastossaLisää ostoskoriin
Someone in purchased